In pickle green and retriever gold, a new house charms like an old. Design is what it’s all about and this stunning piece of property makes the sunshine 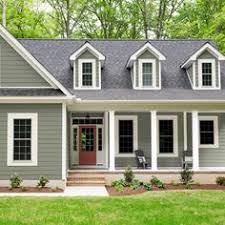 get into it always. It’s a colorful life in this wonderfully designed house. The architecture is classically beautiful, the colors are thoughtful, and the setting is nothing less than stunning. It truly is a colorful life!

You’d expect the house of paint-store owners to be gloriously colored. The new home of Mary Hall and Ken Schuricht, proprietors of Winslow Paint Co. and Winslow Hardware and Mercantile, exceeds all expectations, with its brick-red and gold exterior trimmed in richest eggplant and radiant chartreuse.

Viewed from across the wild wetlands that stretch from house to Puget Sound, the silvery-metal peaked roof and multipaned façade look like a child’s drawing of an eccentric grandma’s house. Street-side, the wings of the house spread to embrace twin carports, each housing a matching Honda Element looking more like car-shaped cartoons than actual vehicles.

To add to the fun, a garden between road and house overflows with flowers in at least every color of house paint. Burgundy dahlias, cobalt-blue salvia, hot-pink zinnias, orange sneezeweed, and dripping golden amaranth are Crayola bright.

“Nothing in here cost more than $2.99,” Hall jokes in describing the lively mélange of flowers she grew from seed or started from six-packs. Red pots holding golden-green Monterey cypress flank the pumpkin-colored front door. It’s clear that someone supremely skillful has been having a good time playing around with color.

Hall gives Bainbridge architect Bernie Baker credit for the stylish architectural details and beautiful coloration. “We tweaked the chartreuse to be kind of dill-pickle green,” explains Hall, and the red ended up very dark brown with a tinge of magenta. The resident pair of golden retrievers inspired the exterior gold color named after the breed.

“Bernie did a rendition drawn with colored pencils,” explains Mary of the process. “We had a little contest while the house was under construction — we all came up with color schemes, and we tried out combos of the various colors — Bernie put it all together.”

The strong lines of Baker’s design shine through despite the color theatrics. The wood-trimmed windows and steeply pitched roofline lend a farmhouse feel that fits in well with the older homes in this casual waterfront enclave. “I’m fond of barns and utility structures,” says Baker of his inspiration for the double pitch of the roof. The new house so suits its surroundings that you can imagine it’s stood right there for decades while neighboring homes were built up around it.

The Hall family owned 15 acres near Eagle Harbor, and Hall grew up in the 750-square-foot red cottage on the property, which was demolished to make room for the new house. Her two brothers live nearby, and part of the original property is now a city park. “I’ve looked at this view my whole life,” says Hall.

The couple found Baker from an interview in the local paper, published because he was one of the few local architects whose work made it into the hit book “The Not So Big House.” “I told Ken, ‘I know him’!” says Hall. “He comes into our hardware store.”

They wanted a house that was modern but not contemporary, and one that would fit into the neighborhood. With wetland setbacks and a compact lot, the house would need to be small. Baker gave them a delicious melding of old and new, sophisticated yet snug, all in 2,000 square feet.

The mostly neutral interior is a restful contrast to the home’s vivid skin. The wide fir floors and river-rock fireplace speak of the old house, as does the cushioned window seat tucked beneath the stairs. Look closely and you’ll see at least 10 shades of beige, from fog and pinfeather to the soft green of hazelnut and taupe-toned filbert.

Hall determined to stay away from the yellow and red tones she remembered from the old cottage. She worked with color consultant Mary Jane Rehm to choose neutrals that flow harmoniously through the small spaces and don’t compete with the view out to the intense green of the wetlands and blue of sky and sea.

The kitchen’s painted cabinetry in subtle shades of taupe, stainless-steel appliances for sparkle, and soft beige concrete countertops set the tone for the main floor. Fir ceilings, beams, and floors, plus the repetition of metal in trim and stair railing, add to the home’s feel of warmly serene sophistication. Bainbridge Island interior designer Bill McKnight designed the red-leather slipper chairs and custom coffee table that houses an “ottoman garage.”

A clever metal stairway rail, designed by Baker, suggests a bike chain. It has such a sense of motion, you expect it to crank into gear, running up and down between main and second floors. The stairs float at one side of the living room, and the flooring for the second level forms the ceiling of the main floor.

“We have everything we need upstairs,” says Hall of the shared office space, little refrigerator fitted neatly into the laundry room, the built-in couch and cabinetry housing the TV in the hallway. The master bedroom is both intimate and grand, with a gas fireplace, beamed ceiling and magnificent view out to the water and ferryboats passing by. On warm nights the windows can be opened so the room is as airy as a sleeping porch. Repeated fir flooring and painted cabinetry link the look of the two floors.

The new house has a sleekly modern sensibility, yet is filled with comforting and comfortable spaces. It is so custom that every appliance slides behind doors, furniture is detailed to fit, and even the dogs have their own mud room. “Bernie listens,” explains Hall of the design process she so clearly enjoyed. “He can blend it all together — necessity, character, flow, aesthetics, and color.”